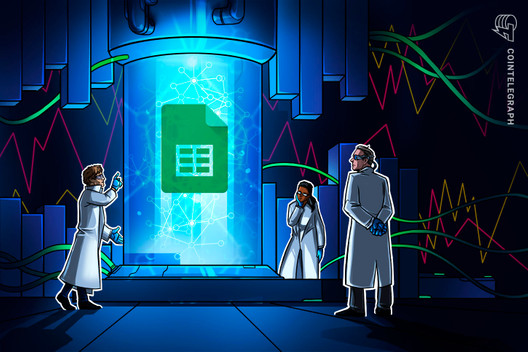 The Baseline Protocol has launched integrations for Google Sheets and Microsoft Dynamics 365.

The new function allows for the maintenance of verifiably consistent records using a spreadsheet in conjunction with an enterprise resource planning (ERP) solution.

Baseline published a proof-of-concept on June 7 demonstrating the “baselining” of spreadsheet data to verify that multiple independent private databases hold the same records.

The Baseline Protocol was launched in March and was developed through collaboration between Microsoft, EY, and ConsenSys.

The concept used baselining to verify that the records held by separate entities’ databases were verifiably identical while allowing company information to “remain in traditional company databases.”

The initiative was developed and executed in collaboration with blockchain solutions firms LimeChain and Provide to demonstrate that the Baseline Protocol can be utilized by both large and small companies, including “those that don’t rely on complex information systems to manage their records.”

The proof demonstrated that the baselining technique does not necessitate that data is stored on a blockchain, instead using distributed ledger technology to “enforce the consistency of the separate records.”

Baselining uses the Ethereum mainnet as middleware for data verification without sensitive or unwanted information being made public on the network:

“Using this and the Google Sheets API, the team was able to connect the spreadsheet with any other ‘baselined’ system and ensure consistency on a record-by-record, row-by-row basis.”

“Our insight was that many smaller companies still use spreadsheets to keep track of their contracts and purchase orders,” said LimeChain co-founder George Spasov.

“With the help of Provide we figured out how to baseline a row in a spreadsheet with a record in a much more sophisticated system like Microsoft’s Dynamics 365,” Spasov added.

“Instead of a single point of truth being one big database full of everybody’s information — which is a terrible idea, certainly for business […] it would be a good idea if we used [the blockchain’s] abilities in data and business process execution and a state service to maintain consistency between databases.”

Likening blockchains to “digital nudist colonies,” Wolpert adds that baselining “lets you put your clothes back on.”

Wolpert noted that the Sheets and 365 integrations were the product of grass-roots and decentralization development from companies participating in the Baseline community — independent from Microsoft, EY, ConsenSys or Google.